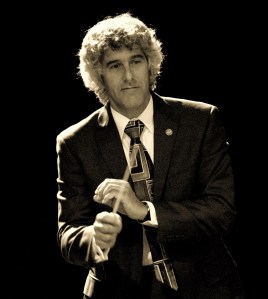 David S. Albert started his musical career under the direction of Scott C. Callaway.  He attended Berklee College of Music in Boston MA and finished his Music Education Degree at East Carolina University. He followed Mr. Callaway as conductor of the High School Band in Elizabeth City, NC. Ten years later, he was selected to start the Band Program and Chair the Arts Department of Leesville Road High School in Raleigh NC.

Bands under Mr. Albert’s baton have performed at State Conventions and most major cities including the Midwest Clinic in Chicago. Il. Mr. Albert was a student of the “Tonight Show” drummer, Ed Shaughnessy and mentored with Buddy Rich.  He served as President of the NCBA and is now Past President of NCMEA. He also served on the Music Standards Committee that wrote the standards for NBPTS.  Mr. Albert retired from the North Carolina Public School System after 31 years of teaching.

Mr. Albert is an Endorsing Artist/Clinician for Ludwig Drums, a division of Conn-Selmer. In addition, he often guest conducts Honor Bands, presents seminars in Student Leadership, and adjudicates festival events.

In June of 2017, Mr. Albert was bestowed the honor of “Conductor Emeritus” of the Leesville Road High School Band.

Mr. Albert is married to the former Margaret Cowan has two sons, Joseph Taylor and Christopher David and, one step-son, John Christian.

Shian-Huey received her bachelor degree from National Taiwan University and a master degree in Biochemistry from National Yang-Ming University in Taiwan. Shian-Huey moved to the U.S. to pursue her Ph.D degree in the Cellular and Molecular Biology Program at the University of Michigan, Ann Arbor in 1995. She stayed in Michigan for post-doc training and research faculty positions working on diabetes research. Shian-Huey and her family moved to Cary, NC for a career in pharmaceutical industry at GlaxoSmithKline in 2011. Currently she is a Principal Scientist at Pfizer, Cambridge, MA, commuting between Boston and NC on a weekly basis. Shian-Huey met her husband Alex Yeh during her PhD studies and they have two children, Alan and Julia Yeh. Alan is a trumpet player and currently a junior undergraduate at Georgia Tech majoring in Biomedical Engineering. Julia is a flute player and currently a junior at Panther Creek High School.  Shian-Huey’s husband, Alex, is a French Horn player and he dedicates himself to 4 local bands and orchestras during his leisure time. Shian-Huey and her family all joined marching bands in high school and enjoy being around music. They believe music education is a crucial element for teens.

A native of Ashe County, North Carolina, James G. Daugherty is currently serving as an Instructional Program Specialist for Fine Arts and Distance Learning in the Davidson County (NC) Schools and Director of Cannon Music Camp at Appalachian State University.  Previous to these appointments in 2015, he served for twenty-one years as band director and instructor of music theory at Central Davidson High School in Lexington, assisting daily with the band instruction at Central Davidson Middle School.  In 2017 he completed his twenty-seventh summer on the faculty/staff of Cannon Music Camp where he had also served as the Dean of Men for twenty years.

While at Central Davidson his bands consistently earned ratings of excellent and superior at regional, state and national music festivals.  In 1996 and 2013, he was named “Teacher of the Year” at Central Davidson High School and in 1997 for Davidson County Schools, a top three finalist for DCS “Teacher of the Year” again in 2013.  In 2012 the bands of Central Davidson performed at the Dixie Classic Festival in Williamsburg, VA with the Wind Ensemble earning “Honor Band” status for the event.  In 2004 the band program was invited to represent the State of North Carolina at the National Festival of States in Washington, D.C. commemorating the new WWII Memorial.  The Wind Ensemble performed for the North Carolina Music Educators Annual In-Service Conference in November of 2005 with a “Midwest Clinic” format program of music for all ability levels.  The Marching Band (an all volunteer group) also performed with the world renowned “Dallas Brass” at the North Carolina Music Educators In-Service Conference in 1997.

In January 1998 Daugherty received the distinguished “Outstanding Young Educator” from the Lexington Jaycees and in April 2006 was nominated for a “Young Alumnus Award” from Appalachian.  He has been nominated for “Who’s Who Among American Teachers” by his students over four times and was also recognized by the group “Who’s Who In America”.   In July 2017, he was inducted into the prestigious Rhododendron Society in the Reich College of Education at Appalachian State University.  As the highest honor given by the college, the award honors alumni for their exemplary service to education and to their communities. The society recognizes graduates whose service as teachers, librarians, human service professionals or administrators has reflected credit on themselves, the field of education and the university.

Currently, Mr. Daugherty is serving as Immediate Past-President of the North Carolina Music Educators Association, a division of the National Association for Music Education.  Previous to his service as NCMEA President, he was elected to serve as District Five President for NCMEA in 2006 and served in that capacity until 2009.   Of particular significance to his NCMEA leadership role, he has championed the importance and place of music education in our schools and state, funding for school music programs, and music’s inclusion by name as a part of a well-rounded education in the “Every Student Succeeds Act” (ESSA) passed into law by Congress in December 2015.

Active in the Lexington community, Mr. Daugherty is a member of Coggins Memorial Baptist Church and sings in the sanctuary choir also volunteering as the assistant music director.

Seth Weinreb is a surgeon at North Carolina Surgery specializing in hernia repair, and also serves as Chief Medical Information Officer (CMIO) at UNC Rex Healthcare in Raleigh.  He double-majored in Music and Biochemistry as an undergraduate at Yale University, earned his MD at Harvard Medical School, and completed his internship and residency training in General Surgery at Emory University.  Seth grew up playing piano and bassoon, was Drum Major in high school and college, studied conducting at Yale, performed and conducted throughout college and medical school, and after wrestling with which path to pursue, he dove into his career in surgery, moving with his wife Alison to Raleigh in 2001.  They have two daughters, Noa who plays the oboe, and Marni who plays the bassoon.  Seth’s only regret is that he didn’t have something like the NCYWE growing up, and he is passionate about helping this ensemble mature and thrive for the many amazing young musicians in NC who so richly deserve it.